Inequality erodes opportunity, and limited opportunity exacerbates inequality. This vicious intergenerational cycle has brought inclusive growth into question, contributed to the rise of populist sentiment, and strained the social contract in many rich countries. The way forward for researchers and policy makers requires not only a clear understanding of the facts about what kind of inequality matters and how it matters, but also an ethical grounding that speaks to the outcomes and opportunities that are important to citizens not only in the here and now, but also in the next generation.

This is the argument I make in a keynote lecture that I have had the privilege to give, first on October 20th 2022 to the 8th Annual Congress de Economía y de Políticas Públicas, SobreMéxico in Mexico City, and second on November 17th 2022 to the Conference on Wealth Inequality and Intergenerational Mobility at the Vienna University of Economics and Business in Vienna.

When comparing many countries, not just the rich but also across the entire globe, researchers have consistently found that the higher the level of income inequality about a generation ago, the more strongly children’s adult prospects are tied to their family backgrounds. This relationship between higher inequality and lower social mobility has become known as The Great Gatsby Curve.

Economic theory, statistical measurement, and public policy have all been most constructively informed by this picture when they explore

Watch this interview produced by the Institute for New Economic Thinking ,who gave me the opportunity to explain what the Great Gatsby is, and highlight how it offers a constructive framework for deeper conversations about the relationship between inequality and social mobility.

It is the stated goal of the Canadian federal government to foster “a strong and inclusive labour market that provides every Canadian with opportunities for a good quality of life.” The legacy of COVID has, however, led to policy incoherence, with some significant reforms directly putting this goal into question.

END_OF_DOCUMENT_TOKEN_TO_BE_REPLACED

This post is excerpted and adapted from my introduction to The Century Press edition of F. Scott Fitzgerald’s The Great Gatsby. I’m grateful to the Press for the opportunity to introduce this great novel from an economist’s perspective, and to be part of its handsome leather bound and letterpress first edition. Go to https://www.centurypress.ca/products/the-great-gatsby-pre-order to learn more about a book that is as much pleasure to hold as it is to read.

“Our faith in possibility may be glorious, but it’s easy to forget that one possibility is always failure,” writes Sarah Churchwell, introducing the chapter in her 2014 book discussing Fitzgerald’s high expectations as he awaited the reviews of what he felt was his greatest work, a novel that he anticipated would vault him into the pantheon of American literature.

The reviews were not good: “F. Scott Fitzgerald’s Latest A Dud”; “a strange mix of fact and fancy”; “not a great novel … neither profound nor imperishable … [but] timely and seasonable.” The Fitzgerald scholar’s book, Careless People: Murder, Mayhem, and the Invention of The Great Gatsby, which is my source for these excerpts, uses the reviews at the time to support her insightful thesis, that The Great Gatsby can be seen as solidly situated in a specific time and place, with characters and plot having real-life counterparts.

Fitzgerald’s year in New York City—the places, the people, and even the lurid stories of a double murder in nearby New Jersey that was fodder for the papers—was easily recognized by his circle of friends and acquaintances writing those reviews. To them the novel must have appeared as much diary as it did fiction, as much journalistic as imaginative narrative. Been there, done that.

Yet as the decades passed, as gossip and headlines faded from memory, Fitzgerald’s book did not fade, and a century later it continues to resonate. To appreciate why, Churchwell’s thesis should be taken further: The Great Gatsby can be seen as solidly situated in a specific economic time and place, it is not just character, but also underlying strictures of social inequality, that drive the novel’s hapless protagonist to his ending. The novel remains as relevant to our age as it did for the Jazz Age because Gatsby’s economic time and place are also our times and places.

The story helps Americans, indeed citizens of all countries facing the challenges of rising inequality, wonder all the more about the hollowness of the metaphor legitimizing it, of the unkept promise of the American Dream.

END_OF_DOCUMENT_TOKEN_TO_BE_REPLACED

The advisory council responsible for the reported dedicated it “to all those courageous people who shared their stories, successes and struggles with the Council in the hope that we would in turn share them across Canada. You are at the heart of this report.”

People with “Lived experience” is how policy wonks and political staffers refer to them, stressing the importance of consulting citizens who are struggling with the challenges of living in poverty and facing the barriers of moving toward a better life.

This means it gets read by a whole group of people who are not policy wonks, and often by people with “lived experience,” who often cry out and share their stories by proposing a comment for my web page, which if it has done any good helped them to realize how far below the poverty line they may well be.

I hesitate approving their comments for public viewing because of their revealing and personal nature.

But maybe I shouldn’t. They have voice, but they need to be listened to. So here is one more voice that encapsulates so much, and in many different ways, of what makes policy to the poor so important, but also reveals the limits of current actions.

END_OF_DOCUMENT_TOKEN_TO_BE_REPLACED

Three next steps for social policy involve: 1. Maximizing auto-enrollment and just-in-time program delivery; 2. Offering full income support with engagement; and 3. Offering broad income and earnings insurance with agency. In this post I introduce the detailed discussion of these proposals that you can also download.

On March 24th, 2020 the Government of Canada Tabled Bill C-13, “An Act respecting certain measures in response to COVID-19,” in the House of Commons, and the next day the Bill received Royal Assent, unleashing the most extensive and quickest change to Canadian social policy in living memory, if not in the history of the country.

The Canada Emergency Response Benefit is the most notable part of the Bill, offering $2,000 of income support every four weeks to all working age Canadians who made at least $5,000 in the previous 12 months and lost their source of income due to the COVID-19 crisis. 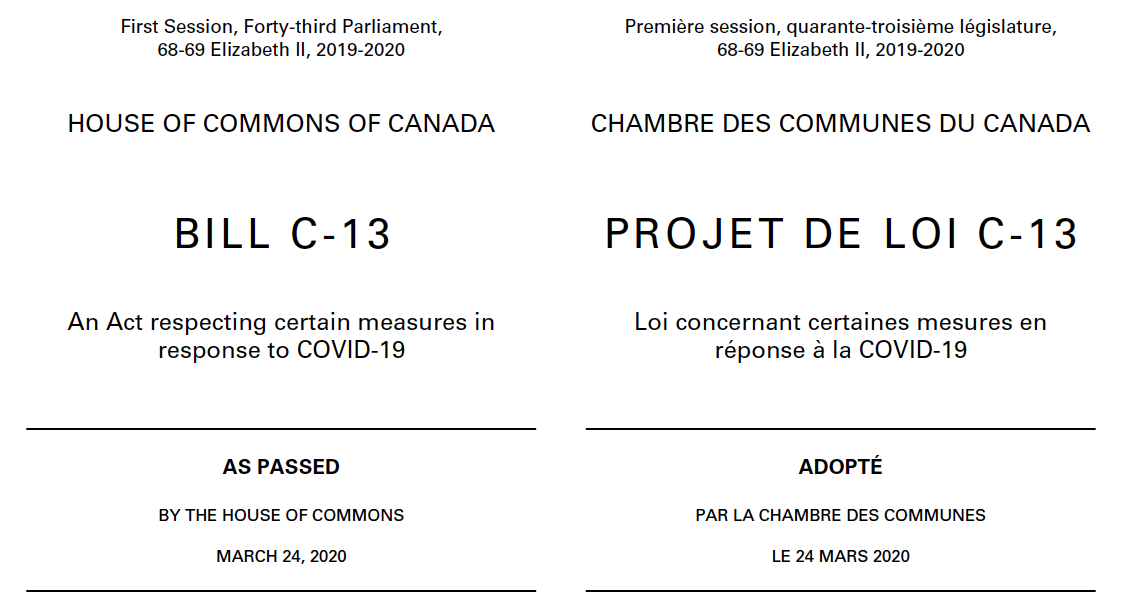 Almost immediately the public policy discussion turned to “what’s next?” Certainly this was so in the short-term as the government and the public service became fully engaged in meeting the evolving needs of citizens and businesses in response to the most serious health and economic crises the country has experienced since World War II.

But increasingly, as the weeks and months passed, it was also so in the longer term: What’s next for the design of social policy in light of the needs and the gaps that the COVID-19 crisis has revealed?

This is the question I address in a detailed presentation that you can download.

In this post I introduce the issues and options for discussing the next steps for social policy, the word “Now” in the title having three meanings that guide this approach.