Arthur Cecil Pigou made lasting contributions to the science of economics, but for macro-economists of a certain generation he will always be considered a laughingstock.

Professor Pigou taught at Cambridge University during the first decades of the 1900s, and had the misfortune of making a cameo appearance in the opening chapters of what is arguably the most influential economics book of the 20th century, The General Theory of Employment, Interest, and Money, written with eloquence, and at times a very caustic pen, by his colleague at the same university, John Maynard Keynes (whose last name, by the way, sounds like “Canes”).

Pigou’s big mistake was to suggest that the unemployed themselves were to be blamed for their predicament. To Mr. Keynes, the notion that the persistently high unemployment rates of the Great Depression were in some sense voluntary was worthy of scorn and ridicule.

In our times Paul Krugman, the Princeton University economist who writes a popular blog for the New York Times, treats “Austrians“, those arguing for a quick return to balanced budgets and small government, with much the same criticism Keynes levied on the hapless Professor Pigou.

The case for austerity depends very much on your interpretation of the causes of unemployment.

Keynes described writing his book as a struggle to break free of old habits of the mind, the most central of which was to treat human labour like any other commodity, bought and sold like copper or pork bellies in markets that equate demand and supply.

From this perspective unemployment is simply an excess supply of labour caused by policies or attitudes preventing wage rates from adjusting as smoothly as prices do in any well-functioning market: at the root of the problem are unions, minimum wage laws and other government regulations and taxes, or simply envious workers, who might not have the skills or ambitions of others, but who nonetheless demand to be paid the same wage.

If the unemployed were willing to work at lower wage rates, the problem would simply disappear.

If unemployment is structural, then more government spending will not create  jobs; it’s only going to compete with the private sector and shift bargaining power to workers. Before you know it a wage-price spiral will lead to higher inflation.

Keynes saw in the unemployment rate data of the 1930s what they show today, a sharp run up that has persisted for years and years. Can this possibly be voluntary? 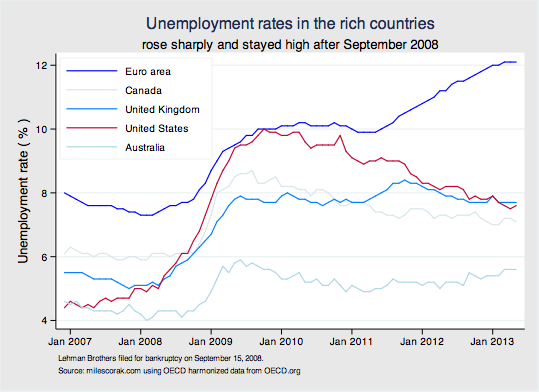 In the 17 countries that make up the euro zone the unemployment rate shot up in late 2008, reaching over 10%, not improving for a year and half, and then even more remarkably rising since mid 2011 to now stand at over 12%, well above its pre-recession level of 7%.

Things are not much better in the United Kingdom, with virtually no progress made in reducing the unemployment rate during the last four years.

Nowhere has the unemployment rate returned to pre-recession levels, not even in countries benefiting from the bonus of a commodity price boom: not Australia, not Canada. And compared to pre-recssion levels the United States looks worse, the unemployment rate doubling to 10% at the onset of the recession, only declining sluggishly since January 2010.

Austrians must convince you that high and persistent unemployment is somehow due to frictions in the labour market: workers are making excessive wage demands, they don’t have the right skills, they don’t want to move to where the jobs are, minimum wages or unemployment insurance benefits are too generous.

To a Keynesian economist, austerity came too soon.

This kind of unemployment is involuntary: unleashed by a locking up of the financial system, and sustained by continued pessimism. Cutting wages isn’t going to fix the problem because inflexible wages aren’t the cause. The ups and downs of unemployment reflect the inherent instability of an economic system driven by the confidence investors have that their decisions will pay off, all the time knowing the future is inherently uncertain. Tightening the public purse just makes things worse.

Ironically, Keynesian economics counsels us to do more, not less, of what got us into the mess in the first place: to collectively borrow and spend in the hope of giving the private sector a kick-start, generating jobs and incomes directly through government spending, which then induces more hiring and another round of spending, hiring, and incomes.

The dynamics of the unemployment rate teaches us that Austrians are hard pressed to make an economic case against Keynesians, and the attempt to do so—to interpret unemployment as frictional and structural—can only be sensibly understood as a response to the political naivety of Keynes’s original thinking.

Keynes longed for the day when economics would be seen as no more controversial than dentistry, a technical science that could fix the bugs in an inherently unstable economic system. He was as much a believer of running surpluses in times of plenty, as he was an advocate of deficits in times of depression.

But politics is inherent to budget making, and the time horizon of politicians is often much shorter than the length of a business cycle. The temptation to spend at an unsustainable rate during the boom has historically proved too much for those with an eye on the next ballot.

Not having confidence that governments can run surpluses during economic booms, you can see why some seem to be arguing for balanced budgets during economic recessions, and trying with all their might to convince us that unemployment is all structural.

For if the electorate can’t be convinced with the simplistic and incorrect logic that governments should, like any family, tighten their belts when times are tough, how can they possibly be convinced when the good times roll?

[ The title of this post is inspired by John Hicks’s 1937 paper interpreting Keynes’s theoretical model: J.R. Hicks (1937), “Mr. Keynes and the “Classics”; A suggested Interpretation,” Econometrica, Vol. 5 No. 2 (April). An abridged and slightly different version of this post appeared in The Globe and Mail under the title “Unemployment: Forced or voluntary? Financial crisis revives an old debate” on September 18th, 2013.

A clearly written and accessible explanation of Keynesian macroeconomics is given by Joseph Heath in Chapter 9 of his 2009 book Filthy Lucre: Economics for People Who Hate Capitalism, which is published by Harper Collins. ]

11 thoughts on “Mr. Keynes and the Austrians: a battle over a suggested interpretation of unemployment”