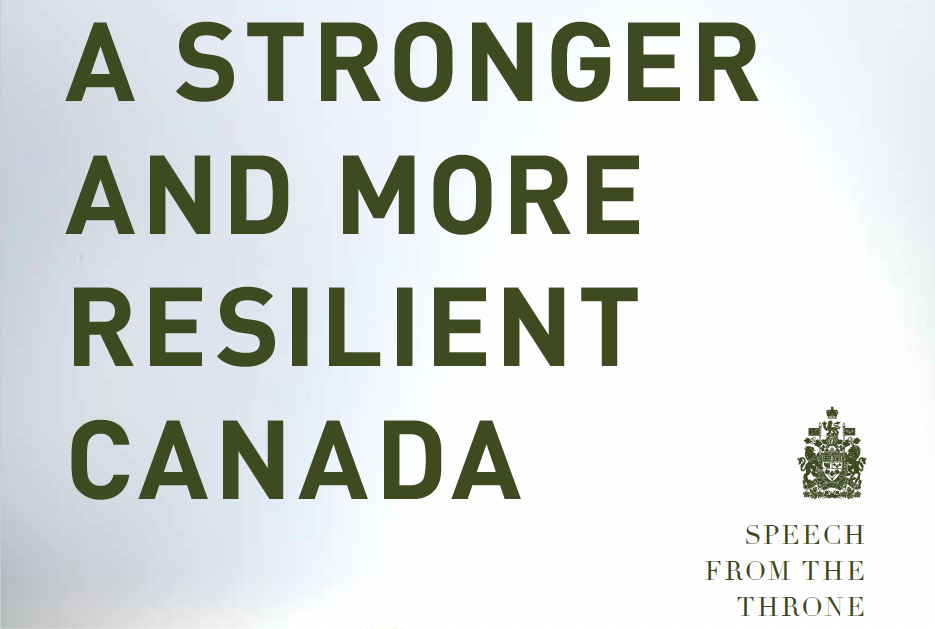 Canadian workers and their families have been rocked by three major shocks in just barely more than a decade, and all three times the Employment Insurance program has been found wanting. What reforms do big shocks call for? A big shock is a big change, and so the eligibility for and generosity of Employment Insurance benefits should in some part be determined by real-time changes in employment, not just the level.

The 2020 Speech from the Throne boldly claims that “This pandemic has shown that Canada needs an [Employment Insurance] system for the 21st century, including for the self-employed and those in the gig economy.”

That is a tall order, a major overhaul of a complicated program in the span of the next couple of months, with little or virtually no consultation of stakeholders or engagement of experts outside of the government.

Will Minister Qualtrough, her cabinet colleagues, and of course the Prime Minister, get it right? After all the need for EI reform has long been recognized, with lessons learned well before the onset of COVID19, but always politically convenient to put off.

What does the 21st century hold for us? Well, we’ve seen a good deal during its first 20 years, and some big lessons are pretty clear. These should be used to judge what the government has in store. This post discusses the first of three lessons and the reforms they call for: Lesson 1, Big shocks matter and need a response in real time

Canadian workers and their families have been rocked by three major shocks in just barely more than a decade, and all three times the Employment Insurance program has been found wanting.

During the autumn of 2008, and certainly by November of that year when the federal government issued its Economic and Fiscal Update, everyone knew, every policy maker that should have known, knew that the economies of the rich world were about to spin downward in a way not seen since the Great Depression of the 1920s and 1930s, and that this posed a major threat to Canadians. Everyone, but our Employment Insurance program.

In October of that year the number of employed Canada’s began to avalanche, falling by close to 300,000 during the next three months, well on its way to an eventual trough 400,000 below the previous high. Over this same period the number of new Employment Insurance claims gently rose by about 35,000 during the three months between October and January, only jumping to attention in the next month, rising by 45,000 in February. All of this was too little, too late.

And yet six years later when Albertans saw the bottom fall out of oil prices during the second half of 2014, everyone knew, every policy maker that should have known, knew that trouble was around the corner. Everyone, but our Employment Insurance program. The avalanche in employment losses began in September 2015 and bottomed out in June of the next year with over 66,000 fewer Albertans employed. New Employment Insurance claims? They gently rose by 5,000 between September and April, only jumping to attention in the next month, rising by 17,000 in May. All of this was too little, too late.

And yet six years later, in the spring of 2020, Canadian workers and their families experienced a job shock like no other in their lifetimes, or for that matter in the lifetimes of their parents and grandparents. In February and certainly by March, everyone knew, every policy maker that should have known, knew the COVID pandemic was going to have serious consequences for the economy, for jobs, and for the capacity of Canadian workers to care for their families. Everyone, but our Employment Insurance program.

The number of employed Canadians fell dramatically between February and March, by more than one million, and then further again to bottom out in April with fully 3 million fewer people employed than just two months earlier. The Employment Insurance program choked, stalled in mid gear, deer-in-the-headlight panic. Too little, too late, requiring the government to institute emergency benefits with broad eligibility and immediate delivery.

What reforms do big shocks call for?

A big shock is a big change, and so the eligibility for and generosity of Employment Insurance benefits should in some part be determined by changes in employment, not just the level. And most important the change has to be measured in as close to real time as possible.

My view is that this argues for a new benefit phase in the Employment Insurance program, one that kicks in when employment suddenly falls, and that enhances the generosity of the program not just in the potential for receiving benefits for more weeks, but also in replacing a larger fraction of lost income.

There are sixty-two EI regions with the number of hours of work required to qualify for benefits determined by the prevailing unemployment rate: 420 hours of insured work, what would amount to 10 and a half weeks of full-time employment, are needed if the unemployment rate is more than 13% in your EI region, but 700 hours if it is 6% or lower.

So it appears that when the unemployment rate in your region jumps you need fewer hours to qualify. But it is not as simple as that. More than sixty regions that tile the entire country, each requiring a monthly unemployment rate to be calculated, stretches the limits of Statistic Canada’s workhorse survey, The Labour Force Survey, beyond statistical credibility.

The 50,000-odd households captured in this survey is a big enough sample to offer a quick and reasonably clear picture of employment and unemployment for the country and the provinces, but not for smaller areas. Statistical noise doesn’t cloud the signal of reality when you are interested in Quebec or in Alberta, but it is a dense fog when you want information for Gaspésie-Îles-de-la-Madeleine or Northern Alberta outside of Edmonton.

So it is no surprise that this rate, and the number of hours required to qualify for Employment Insurance benefits, did not change in March nor in April even though the country entered into a lockdown and job prospects evaporated.

Only in May, as the three month rolling average began to take into account the COVID crisis, did the unemployment rate for Toronto jump to 8%; and finally by June all the numbers feeding into the average no longer reflected pre-COVID and the regional unemployment rate for the city jumped further to 11%.

This means that EI eligibility rules are hard-wired to respond with a significant lag when things change suddenly and sharply, when hardship is obvious to all except the program meant to address it. This needs to be reformed if the program is to meet the challenges of big shocks, the very kind of challenges that lie at the heart of its mandate.

The University of Ottawa economist David Gray and his co-author Colin Busby recognized this years ago. Writing in 2011 they suggested:

New benefit criteria should be linked to the national unemployment rate, or better yet, the rate of growth or decline in national employment.

My view is a nuanced version of this, put the focus on changes in provincial employment rates.The provincial data is as reliable and rapid as the national data, being released every month by Statsitics Canada. And provincial statistics might be preferred to national numbers since big shocks may be province-specific or impact provinces differently. Finally, employment rates might be better suited because they are more closely tied to job prospects and the demand-side of the labour market than unemployment rates.

But either way, these reflections ask that reforms toward a 21st century Employment Insurance program do in a rules-based way what COVID era policy-makers were forced to do in a discretionary way, kick in a more generous program that is easier to access when job prospects disappear.

The direction for reform should be to add an extra benefit phase to the program, a Canada Recovery Benefit type of benefit phase that everyone would have access to, when the provincial employment rate falls by a say percentage point or more below its previous 12 month high. This recovery benefit would then fade away when employment rates returned to normal.

This program phase should also be more generous. During big shocks jobs disappear, and this means joblessness is involuntary and not influenced by “incentives” to work. This changes the work incentives trade-off that is embedded in Employment Insurance, calling for a higher replacement of lost income and longer duration of benefits.