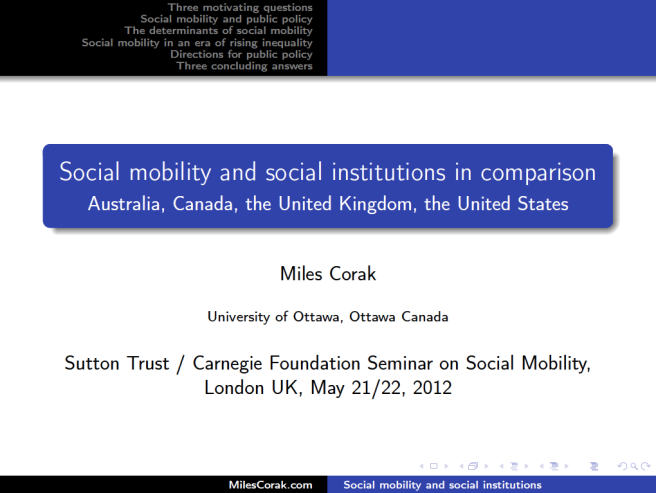 Social mobility is about twice as great in Australia and Canada than in the United Kingdom and the United States.

This is the first of three facts upon which my presentation to The Sutton Trust and The Carnegie Corporation workshop on social mobility called: “Social Mobility and Education in the Four Major Anglophone Countries” on May 21st. This summit of academics, politicians, and public policy advocates coincided with the one year anniversary since the Deputy Prime Minister of the United Kingdom, Nick Clegg, released the government’s social mobility strategy.

I made the opening presentation offering an overview, and here it is as a pdf: Social Mobility and Social Institutions .

My analysis is based upon three facts that lead to three broad conclusions.

First, the degree of social mobility—as measured by the extent to which a son’s earnings are related to his father’s earnings—varies a good deal across the rich countries, and this variation should be a public policy concern. Citizens of more mobile countries are more likely to report a high level of life satisfaction because high mobility is associated with equality of opportunity. The tie between father and son earnings is almost twice as strong in the United Kingdom and the United States than it is in Canada and Australia, two countries to which they can reasonably be compared.

Second, this variation occurs in a particular way: mobility is higher where inequality is lower.  This relationship between social mobility and inequality may be seductive for policy makers: tax-transfers might be seen as solving two problems at once, lowering inequality in the here and now, and lowering the degree to which it is transmitted across the generations. But inequality is not the sole cause. It is also a signal of a whole set of forces associated with how families, markets, and government policy interact to determine the life chances of children.

Third, this said, in an era of growing inequality, the more unequal societies—like the United Kingdom and the United States—will likely not experience more mobility without concerted and effective public policy addressed not just to inequality but also to how families function, how the education system develops the human capital of relatively disadvantaged children, and how families interact with a labour market that is increasingly more polarized.

The summit continued on May 22nd with an opening presentation by Nick Clegg.