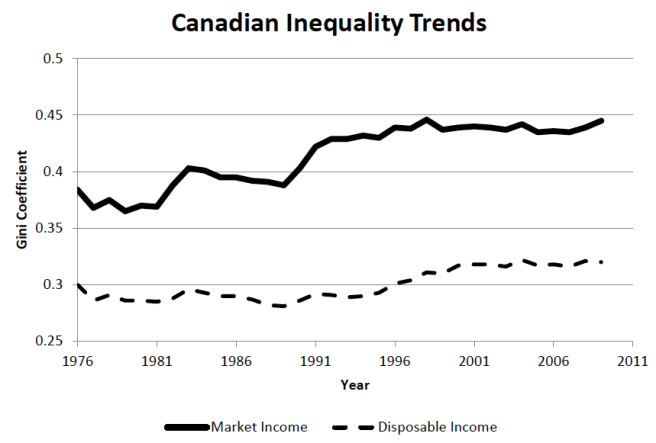 While inequality in Canada has increased over the course of the last three decades, the tax and transfer system can significantly reduce disparities in market incomes. But the political will to use the tax system may be limited, and public policy needs to address underlying labour market developments if it is to pursue an agenda of greater equality.

This is one of the major themes arising from a recently released discussion paper by a group of labour economists from the University of British Columbia: Nicole Fortin, David Green, Thomas Lemieux, Kevin Milligan, and Craig Riddell.

In Canadian Inequality: Recent Development and Policy Options, published by the Canadian Labour Market and Skills Research Network, they show that from 1980 to about the mid 1990s inequality measured after taxes and transfers had not increased at all in spite of more unequal labour market incomes.

During this period the tax system, particularly at the provincial level, became more progressive and neutralized labour market trends. This was the result of more generous social assistance payments and higher surtaxes on the rich.

After the mid 1990s this stopped as progressive policies were reversed. As a result labour market inequalities became more clearly reflected in take-home pay.

The authors suggest that “while taxes and transfers can work to reduce inequality, the political will to address persistent increases in earnings inequality through these policy tools alone may not exist…”

In fact, a significant part of growing inequality has to do with the share of incomes earned by those at the very top. To be in the top 1% in Canada an individual must earn about $230,000 annually, implying that on average 1 percenters earn about $450,000 compared to the country-wide average of $36,000.

Over 80% of those in the top 1% are men and the majority hold a university degree. In contrast to the United States, only 10% work in finance, and while the largest fraction are CEOs and senior managers at 14% the only other occupation of significance are physicians who represent not quite 12%.

The authors go on to discuss some of the underlying explanations for these developments, and what they see as policy options to address inequality, options that use the tax-transfer system—including raising the top marginal tax rates to 50% or even more—but also those addressing the underlying labour market structures and institutions.

But they leave the politics of public policy aside, only briefly making the link between the growth in inequality as a result of the higher share of income accruing to the top 1%, and the erosion in the political will to use more progressive taxation.

Given that the top 1% are a more diversified group than in the United States, where the finance industry and issues of corporate governance are more salient, then “policy measures such as a new tax on ‘the rich’ would mostly target people who are neither top executives nor financial professionals.”

The major objective of the paper is to offer an accessible summary of the major facts, explanations, and policy options dealing with inequality in Canada, recognizing that these themes play out differently in this country than elsewhere.

This may be one reason why the paper also leaves some important themes—particularly the relationship between inequality and opportunity that have been central to US and UK discussions—untouched.

Canada is generally seen as a more mobile society inter-generationally, with a weaker tie between parent and child earnings than in the US or the UK.

But this reflects the nature of labour markets, families, and how progressive government policy was a generation ago. If higher inequality can erode support for progressive tax and transfer programs, then one has to wonder if it will also over time change more broadly the balance between market, family, and state—and therefore the degree of social mobility.